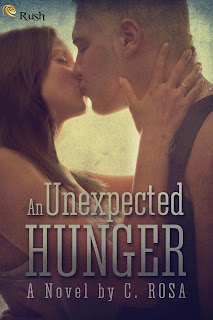 Alexa Stanton has the world on a plate. Five years after graduation, she's following her culinary dreams as sous chef of a popular California restaurant. But one explosive night in the kitchen brings her life crashing down. Ashamed and broke, Alexa retreats home to New Jersey for a fresh start.

Ricky Perry is known for two things: getting kicked out of high school and charming the pants off any woman. He is exactly the kind of guy Alexa swore she would never fall for again. In high school, it took all of Alexa's willpower to avoid him. But this isn’t high school anymore, and Ricky is more appealing than ever.

C. Rosa lives by the Jersey shore with her husband and their four year old son. In 2008, she received her Bachelor’s Degree in Communications with a concentration in Writing Arts. After taking some time off to start a family, she made the decision to go back to school. In September of 2013, she received her Master’s Degree in Education. Writing has always been a part of her life, but it wasn’t until she became a full time stay at home mom when she decided to finish writing her first novel. Three books later, and she signed her first NA romance with Entranced Publishing, releasing December 2013. In between writing, and not letting the laundry pile too high, she’s also active on her blog, twitter, and Facebook.

I'm on WATTPAD Check me out!